There are many reasons why you should visit Uganda and one of them is Murchison Falls and the wildlife that lives in the National park near the falls. Murchison Falls National Park is the largest national park in Uganda occupying an estimated 5020 square kilometers including smaller wildlife reserves of Karuma and Bugungu. The 3 make up the

from Karuma falls on the eastern border of the park to Lake Albert.

Since the 1960s the park was an acclaimed home to large herds of elephants and buffalos among other animals until the period of 1970-1980 when the government of Uganda under Idi Amin Dada used parts of the park as a training ground for the army. This left the park devoid of some species like the rhinos and the African wild dog as other animals reduced in population.
Since then the park has been managed by

although a few challenges of poaching and rebel activity still happen within the park’s boundaries. Nevertheless, there is an increasing trend in wildlife numbers for both birds and animals within the park. 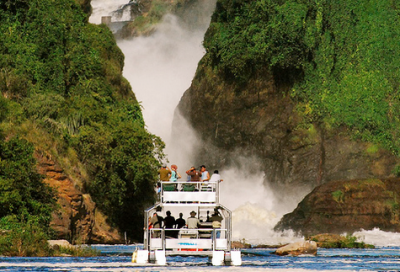 are a significant sight in the park. On the trail are calves and calving mothers covered in mud as they cross the shallow banks. Across the river’s muddy banks are wallowing buffalos, some old males seen fighting a few metres from the river bank.
A school of yawning

is part of the sight on a

while crocodiles sluggishly move to the open river banks covered in mud that you can almost stumble on them unknowingly as they bask in the sun. Other animals from this vast park

and many other animals found in the northern section of the park that is mainly under acacia woodlands and savanna.
To the south are thick woodlands that make up the Rabongo forest and Kaniyo Pabidi forest reserves are a good for chimpanzee tracking and primate safaris in Uganda. Some of the primates found here include olive baboons, red tailed monkeys, white and black colobus monkeys, chimpanzees and bush babies among others.
Chirping in the forests and on the papyrus swamp river banks are several species of birds. More than 300 species of birds are found in Murchison Falls protected area but the most significant is the shoe bill stork that is endemic to the papyrus swamps in this particular park. The shoebill stork that has a 20cm shoe-like bill and weighs about 6kg is only found in Murchison Falls National Park. Other birds in the park include malachite kingfisher, white thigh hornbill, pelicans, bee eater, fish eagles, cormorants, skimmers, heron, chocolate-backed kingfishers, bellied crombec and many other birds.

The park is a huge eco-system that can be explored in many different ways. A boat trip to the gorge on which the falls plunge to make the 40m high Murchison Falls is a fascinating trip. It is the best way to discover the park’s diversity, be it birds, wild animals and beauty of the magnificent waterfalls. The boat trip starts at Parra and is normally a 3-5 hours’ trip that must be booked in advance for prior arrangements.
Safari game drives are great during the dry season Mid December to February and later for June and July. Many animals are seen making a daily trip to the river bank while predators like lions roam the banks for a hesitant catch for the day!
Bird watching trips are good throughout the year but more sightings are made for the wet months of March, April and November during nature walks or along the trail boat to the falls.

The park is located off Kampala Masindi Highway and the drive from Masindi to Paraa is 5 hours via Kicumbanyobo gate. A ferry is available to transport tourists from Paraa to the other side of the park. There is an airstrip for charter flights at Pakuba located a few kilometers from Paraa.
Accommodation
There is plenty of accommodation around Murchison Falls National Park. There are a number of luxury safari lodges on Paraa such as Paraa safari lodge and Sambiya river lodge offering excellent accommodation, dining and private chalets for couples on honeymoon. Other facilities for accommodation near the park include red chilli rest house, a public campsite and other private owned amenities.