Bwindi Forest National Park is located in the south western region of Uganda within the districts of Kabale and Kisoro. The Park is on the western arm of the rift valley called the Albertine Rift covered by dense tropical rain forest covering nearly 330 sq kilometers on the peaks of Ishasha gorge (1160m) and Rwamanyonyi (2607m)

The forest has more than 320 different tree species and plants specifically ferns, vines and shrubs in an intertwined forest canopy that justify the name-impenetrable forest. The forest is said to have survived nearly 1200years and receives close 2390m during the rainy season months of March to April and later for September to November. 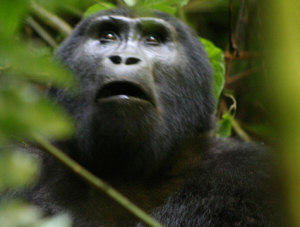 of Bwindi are the prime tourist attraction on all Uganda safaris. Bwindi Forest Park is home to more than 300 mountain gorillas living in an estimated 6 families headed by the silver back males. Since 1963, gorilla tracking has taken first place position for Bwindi tourists and there are about 5 gorilla families tracked daily. Mubare is a popular tourist family with 18 members headed by one silver back male. Other gorilla families are Habinyanja with 23 gorillas and 2 silverback males, Rushegura has 9 gorillas, 1 s

ilverback and Nkuringo with 20 members and 2 silverbacks.

Tracking of gorillas is often an intense experience that can take up to hours of hiking steep muddy slopes and cutting through the thick forest vegetation. Only 8 gorilla trekking permits are issued daily by Uganda Wildlife Authority in Kampala as a move to promote the conservation of this UNESCO world Heritage site. This implies that you have to book your permit not less than 2 months in Advance.

Trekking normally begins at 8h00 with briefing as guided take you through what to expect on the trail adventures. An armed guide leads a group of eight people in pursuit of one of the gorilla families following the trails from the last night’s adventures. The time spent with the gorillas is normally limited to one hour however; tourists are cautioned to follow all instructions from their guides for safety.

Although the mountain gorillas are the highlight of Bwindi forest park, there are other mammals and birds within the forest. The forest has other primates like chimpanzee, colobus monkey, L’hoest, grey checked mangabey, red tailed colobus and the golden monkeys that are endemic to the Albertine rift. There are 30 elephant herds, 300 species of butterflies, 27 frogs species, snakes, insects, chameleons and other wildlife species.

Bird watching is another adventure in Bwindi forest recorded to have nearly 300 species of birds. 24 of the 26 Albertine endemic birds are found in Bwindi forest and these include short tailed warbler, bar-tailed trogon, rusty faced woodland, yellow eyed fly catcher, kivu ground thrush, wilcock’s honey guide, white tailed monarch and the dusky crimson wing among many others. 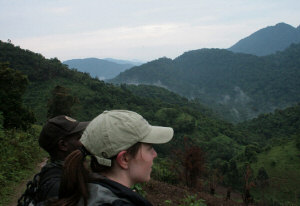 Bwindi forest park is good for hiking and nature walks besides the gorilla trekking excursions. There are 4 nature trails within the park that lead to the most significant eco-systems in the forest. The Munyanga forest trail is popular with short forest walks down to River Munyanga and the different water falls of Rushurra, Muzabajirro and Ruizi. The trail to Ruizi river is best for bird watching while Rushurra has many unique plants and vegetation such as orchids and ferns. It also gives a spectacular view the snow capped peaks on Rwenzori, Lake Edward and the rift valley. Muzabajirro has clear viewsof the virunga ranges of Rwnada, the rift valley escarpment and the forest canopy at large.

Since Bwindi fetches the bulk of Uganda’s tourist revenue, intense conservation efforts and initiatives are undertaken to preserve the forest bio-diversity from human activity and encroachment by the Batwa, Bakiga and Bafumbira people that live near the park’s borders. However, major challenges for park run by the Uganda Wildlife Authority come in terms of poaching, deforestation and agriculture.