Fes Morocco, Fes City
This is a sewel Holy City of the Spanish Arab Civilisation. It is not easy for Fez to show up its secrets, to show its shadow and secretine becomes a little too late to be discovered. The ancient city is only appreciated for its medrsa architecture because of its merchants and artisans. The visitors are attracted by the fragrances, colors and the captivating sounds of the city. The1st sanctuary of human research is in the city of Moulay Idriss.

Akaraoulyne University has been one of the intellectual and religious centre for almost eleven years, whose influence has spread all over the boundaries of the kingdom.

The aul times was traced by Idriss system. They presented to him Fas (gold and silver) in 789. This is where the name Fez came from.
The city is bordered by hills and Atlas Mountains in the South and lies far in the Saiss plains. 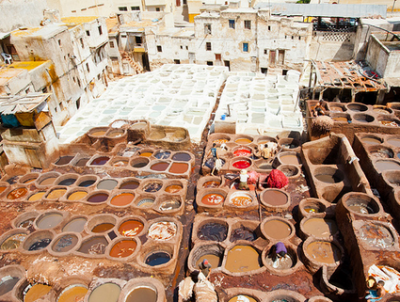 Fez has become the kingdom’s spiritual capital, characterized by artisans, cultural traditions and a number of religions.
The sculpted cedar door is the only way through to reach the Andalusia mosque, which was governed by successive leaders as far back as the 9th Century, with green falences decorations, the imposing minaret crowns, the RSIF mosque. The former student’s hostel around Karaoulyne mosque in the Medersas gives a clear reason for the existance of the town as well as acting as a workshop centre in Kissaria, which sales local goods like silk, slipper, brocade work and fabric, maize, cotton among others.

El Attarine craftsmen offer the best craft work for the visitors to have a look at and thereafter pay for some. Each district has its own carpets, blue enamelled pottery, multitude of colours and wrought iron and The Jamal Palace refurbished by 1930 into a luxury hotel being one of the most quality buildings in Morocco.

DAR BATHA MUSEUM:
This museum was founded in the 19th century, which is favourably competing with those from Fez. The houses in the museum are decorated with Fez traditional art such as wrought iron, sculptured wood, decoration materials, carpets, coins, seweter and embroidery. However, the most beautiful are made by the craftsmen from Fez and museum counter piece is found in the pottery room.

The famous Fez blue was invented by use of cobalt in the 10th Century and behind being highlighted in colour and with white enamel. The astrolabes which are instruments made by the Arabs, should not be missed by the visitors, as well as the mystery of the beauty of the Jewel and the talisman.

BORS-NORD MUSEUM:
This is a military museum close to the rampant remains found in the 16th Century. It became a military museum when weapons were transformed into it. This has come to be called so due to donations for the visitors. They have a variety of adventure both in weapons and art designs.

For everything in the museum is a weapon related tool, covering from parts of Europe, India and Asia.
However, some are made in Morocco, such as stones and rifles which are big in size, as well as a 12-ton weighing canon used in the fighting of the 3 Kings, which is 5 meters long.

ERFOUD:
The region of Erfoud was considered in place after the French occupation of Morocco, in order to take control over the Bedouins of the region. The place got its name after the French military settlement was set up in this region.

For people visiting the Ziz valley, Erfoud is the major street base they should use. However, Erfoud is not a tourist destination itself, but travellers like to move through this city.

Rissani:
This is a traditional site with a number of people and a lot of heat and looks like the Egypt Nile valleys, because there are small canals that pass through these villages with the towns being one of the most typical villages in Morocco.

One of the Golden events is the sunrise during the morning hours. From the golden clouds, which view a Sahara background, visitors can then go back fro breakfast. However, the Touargees people go on for adventure in the ancient Rissani city. This can be by use of 4 x 4 wheel vehicles.

Merzouga:
Morocco’s only lakes are found near dams. However, the Dayet Sriji lake in the Sahara is a big wonder and when you travel South, then you will find various lakes like the salty lake as well as true and false lakes, which attract a number of flamingos, best for viewing.

The camels travel through the oasis trees and matters as long as you move on the nature and the temperatures since the water streams of the canals will go on weakening.