This park is situated in the west of Uganda close to fort portal town. The park occupies an expanse of approximately 790sq. kilometers and it is the most stunning tropical rain forest in Uganda. Kibale National Park was established and opened in 1995 to primarily conserve the Kibale forest. For years now, tracking has remained the major activity in the park. Additionally, the park is a haven to 13 more primate species.
Because of the different altitudes, the flora in Kibale National Park varies from the ever green rain forests to the dry-tropical forest, savanna lands to wood lands, all of which provide a wonderful habitat. To the South is Queen Elizabeth National Park and this allows game to move freely between the two parks. There are about 1,450 chimps in the park making it the most populated park with primates. Other primates include the red tailed monkey, grey checked Mangabey black & white colobus and olive baboon.
Other animals in the park include elephants, leopards, warthogs, buffaloes, bush pigs and hippos among others. You will also view some reptiles, butterflies and amphibians. 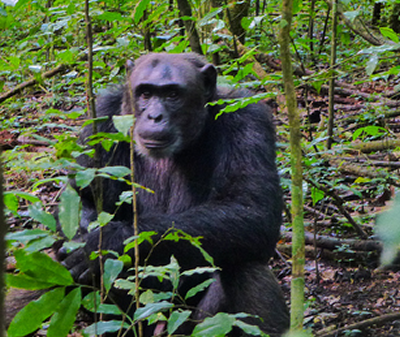 Additionally the park is a favorite bird watching paradise for many with close to 330 bird species recognized in this area. Among the ones you will see are black bee eaters, little Greenbul, African Pitta, black eared ground thrush, small sun birds, crowned eagle, yellow-spotted Nicator and the woodland warbler.
The prime activity there is chimpanzee tracking. The endangered primates are tracked in groups of 4 to 6 people in the company of a tour guide. Visitors are allowed to stay with these primates for a maximum of one hour. Visitors are strongly advised to follow all but none of the rules & regulations as stated by the guides. To avoid infecting the primates, all sick visitors are prohibited from entering the forest.  Generally, the entire park is covered with forests for that matter therefore, visitors are recommended to wear trousers, long sleeves and boots to avoid ant bites.
As compared to gorillas, chimp tracking is less tiring. The chimps spend majority of their time in the tall canopy trees feeding on fruits. Chimp tracking is carried out in the morning hours and you are advised to prepare adequately for before your journey. For those who would love to take part in the tracking expeditions, you are advised to book in advance especially if you plan to take the voyage during the peak festive seasons so as not to miss out on this grand opportunity. In addition there are close to sixty species of mammals recognized in kibale forest. During the dry season that runs from November to February, the main activity is hiking. The park can be reached through road transport connecting from fort Portal.

It is located south of Fort portal, at an altitude of about 1,230m above sea level.The forest covers an areaof about 760sq km and is divided into seven zone for management purposes,reseach ,natural reserve, civic-cultural, recreation , harvest, community and protection.

is one of the most gorgeous and marvellous Forest in uganda.It is the most popular harbitat for the closest living relative to man that is ;the endangeredChimpanzee and even the colobus monkeys with the l’hoesti monkey.This park has one of the highset numbers of primatein Africa totaling to around 13 spicies with blue monkey,red tailed monkey,black and white colobus monkeys(which is the emblem of Kibale national park ) bush babies, grey cheeked mangabey and pottos.

Kibale forest national park has got nature trails into the forest have been created and quite apart fromthe chimps,the walksare won

This is the most popular tourism activity .It is the guided chimp- trackingexcursion out of Kanyachu.

Kibale Chimpanzee Tour Uganda Primate Safari, habituations experience;here you will expect to experiencethe chimps de-nesting between 0530hours to 0630hours. You can follow them up in their daily activities up to nesting time between 1830 hours to 1930 hours. There fore a visitor has tobe ready to start on this activity from very early in the morning .

Primate walk; This walk starts from kanyanchu river camp at 0800 hours or 1500hours.It take 2 to 4 hours.

Forest hike; This is a seasonal activity and it is done on 12 kms and strictly restricted to the dry season(mid november – february and June-september).it hight light the diverse habitats of the par.like birds , bush pigs ,duinkers, monkeys and many others .

Children’s activities; Educational walks to children are in offerings.the place has four ranger guides who educate tourists childer especially under 12 years.The children acees the foret and learn about the ecosystems and it’s in habitats.

Bogodi wetland sanctuary and Magombe swamp Walk;This is the best place for birders.It is where giuded nature walks along a trail take placewith board walks.It has got around 138 bird speciesincluding the Great blue turaco, and many number of butterflies.