The Queen Elizabeth bird observatory was established in 1997 with the aim of studying resident and migratory bird populations in the national park, increasing local awareness through education and guide training programs and further developing Avi-tourism through the construction of hides, walk a ways and birding trails. The resident field coordinators ,Malcolm Wilson is particularly interested in palaearctic bird migration along the Albertine Rift and is currently conducting along the term bird-ringing programmes the he hopes will expand the understanding of this little –Known migration route.
In just over a year Malcolm has discovered more than 10 “new” species for the park’s already impressive list including Uganda’s first record bar-tailed Godwit. Visitors are welcome at the observatory, which lies adjacent to the institute of ecology hostel at Mweya.

Queen Elizabeth Park is Uganda’s most popular game reserve and certainly one of it’s most scenic. It stretches from the crater-dotted foothills of the Rwenzori range in the north, along the shores of Lake Edward to the remote Ishasha River in the south, incorporating a wide variety of habitats that range from savanna and wetlands to gallery and low land forest. This remarkable diversity is reflected in its bird list of over 550 species, the largest of any protected area in Africa. 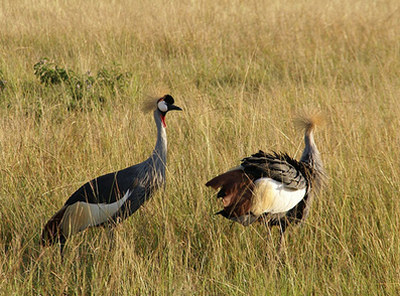 The main camp and park head-quarters at Mweya is a convenient base for exploring the site in the northern Part of the park , whilst the road network running from Ishasha camp and ranger post , 80km to the south , provides access to the Ishasha area . These birds are threatened by numerous predators and raptors including humans.
The main camp at Mweya is attractively positioned on the peninsular separating the kazinga channel from Lake Edward, with fine views of the Rwenzori mountains to the north and spectacular sunsets over the lake. An advantage of the park area is that one is not restricted from a vehicle and a number of widespread bush associated species may be seen easily, particularly in the vicinity of the airstrip and the camping sites along the Kazinga channel.

Please note that on your birding trip, you may need birding binoculars, an othinology book for better indentification of Uganda birds. We also encourage you to participate in efforts that encourage avian conservation of Uganda tourism.