Uganda Sports
Home›Uganda Sports›Arsenal and Football Made in Germany, Ozil, Per And Podolski

Arsenal and Football Made in Germany, Ozil, Per And Podolski

The top biggest signing in English Football has been credited to Mesut Ozil, A German International coming from the famous Real Madrid Club in Spain. but with him, comes a complete feel of the German dominance in the world of football today. Its becoming more evident that currently the Germans are ruling the world football even when no single individual player has been able to take the most prominent of accolades in the leagues. 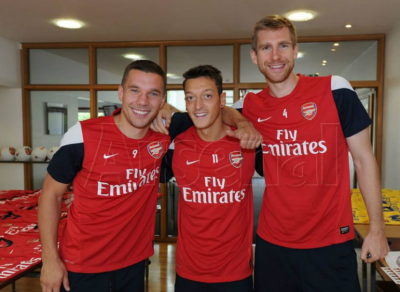 Just look at Arsenal today, with Podolski, Meter and Poloski, striker, midfielder and defender respectively. You can feel the German wave in the English premier league. Its a German connection, full of experience with an intent to add to the English flavor of Theo Walcott and Jack Wilshere. And yes, oh man,  I used to watch “Football (and later Soccer) Made In Germany” on my local UHF channel 22 all fuzzy as a kid just to get my weekend satisfaction.

All Arsenal fans cant wait to have a through ball from Per to Ozil and with that killer pass to Podolski to make an all German goal.Its Just too obvious with them, no team would like to be Opponents at Arsenal.With facebook fans calling them the three musketeers and the three amigos, there is a great feeling of the German power sweeping accross the premier league.