While we have visited many countries in Africa and discovered much about them, Egypt remains the only mystical holiday destination you can visit over and over again without understanding this ancient empire. Many secrets to unfold and adventures await all people on a ride to ancient Egypt. Here is a guide to the top tourist attractions in ancient Egypt;
[vc_row][vc_column][qk_posts_list cat=”egypt” order=”100″ orderby=”ASC” thumb=”6″][/vc_column][/vc_row]

The Great Pyramids of Giza

These perfect works of ancient Egypt architecture were built for fallen pharaohs, Khufu, Menkaura and Kafhre. Khufu’s pyramid is the Largest of the three ruins standing at an estimated 500ft. with thee ancient wonders. You can fail but wonder how they stand to this date without falling after centuries of construction.

This ancient monument is one of the must see attractions of ancient Egypt located near the Giza Pyramids in Cairo. To date, archaeologists remain in awe how this giant monument was built and for the purpose that remains mystical. Although some suggest a riddle to mark is origin…no one knows why a human head rests on the  animal abdomen! 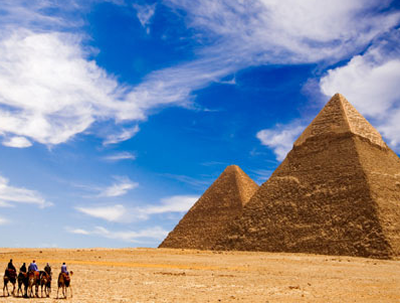 The ancient temples of Abu symbol were built during the reign of Ramses II to honor the king and his wife Nefertali. The two temples are considered one of ancient Egypt’s marvel even after relocating them to  a site beyond their original location near Aswan Dam.

An Egypt with the capital city Cairo is nothing. Cairo is home to the largest population of Egyptians and has many on ancient Egypt’s attractions such as the Great Pyramids of Giza, luxury hotels, buzzing souks (markets), busy streets and blend in the contemporary world of culture and traditions.

From ancient Egypt and studies of early civilization, River Nile played a major role nourishing the barren land and sustaining Agriculture in Egypt. Today, there are luxury Nile cruises and Felucca boat rides at sunset to take you down the world’s longest river with sights of Luxor, Cairo and Aswan beyond the horizon.

The Valley of Kings

The valley of kings in Luxor was the burial place for many of Egypt’s kings, queen and nobles. The valley has many mummies such as Tutankhamun and hidden treasures that were buried with the kings and nobles.

This museum located in the capital Cairo is home to pieces and bits of ancient Egypt treasures discovered in the tombs, different cities and pyramids around Egypt. The museum like other important sites in Egypt is guard with tight security from robbers and antique collectors. It is the best place to kick off tours of Egypt given its wealth of history on Egypt, items showcased and artifacts to tour.

Part of Egypt’s landscape is in the vast Sahara desert. Nevertheless, the desert is a fun place when you visit Siwa oasis. The lush scenery at the oasis is a great way to relax from the intense heat of the desert sun. It is written that Alexander the Great took a rest from his conquests at this same oasis in Egypt!

Just like the English Translation for Necropolis…City of the Dead, every thing in Sakkarah is mysterious. There are many unknown pyramids (Step Pyramids) in Sakkarah whose fame has been overshadowed by the Great pyramids of Giza. Be the first of the few tourists to explore the step pyramids, history and culture of the people of Sakkarrah.