Algeria is considered the largest country in Africa located in Norwest Africa to the coast of the Mediterranean Sea. Its name originates from the capital Algiers (translated as Al jazir) that was formerly ruled by Berbers, French and Arabs up to the 17th century.
Since its independence on July 5 1962, Algeria has gone into a series of coups, riots and protests making it enter a period of economic recession since 1980. Nevertheless, the country is trying to suppress it political protests and improve its economy. Algeria has faced many terrorist threats since 2000 especially in the northern parts of the country for towns like Clef, Collo, Ain Delfa and Laarba among others.
Although 60% of the country lies in the vast Sahara desert, Algeria is also an agricultural based economy with 10% of its land boasting fertile soils.
Travel Guide
[vc_row][vc_column][qk_posts_list cat=”algeria” order=”100″ orderby=”ASC” thumb=”6″][/vc_column][/vc_row]
Algeria has an airport that at Tamanrasset that receives direct flights from London, France, Dubai and other destinations in Africa. There are buses, train and taxis to take you around the different cities and towns in Algeria. Northern Algeria is very insecure with an increase rate of crime and terror activities during the evenings. Avoid travelling by road in the evening and if you must use a charter flight!  Arabic is the official language used although Berber and French are widely spoken by the different people living in Algeria. French is commonly used in Algeria and in major towns across the country. 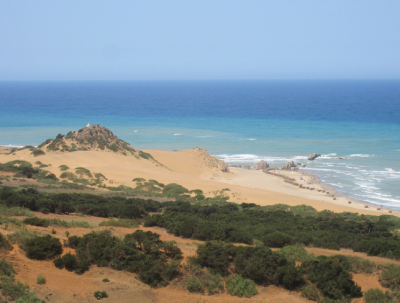 As a popular tourist destination, Algeria is a hub of various flights. You can book your flight to Algeria online here. We present to you information to help you plan for your flight, airports, flight tickets, booking information, airfare and discount cheap flights to Algeria.

The best hotels in Algiers offer excellent facilities from swimming pools to restaurants, health clubs, bar and conference halls, something typical of 5 star hotels. The beach hotels are prefered since they are much cooler in a rather hot environment.

There are all sorts of car hire or rental options, wether its for wedding, upcountry journeys, tours to national parks and attractions, this guide presents to you the perfect planner for your road travel.

You can get various cars for hire ranging from simple saloon cars to limousines and safari or tour vehicles for a rather uncomfortable terrain. Its possible to get a self drive car or with a chauffeur., it all depends on how much you are willing to pay for the services.
Algeria is renowned for its beaches in the north coast and some of the popular beaches in Algeria include Sablettes, Ain el Turk, Canastel and Les Andalouses among others. You can also visit the list of Algeria’s archaeological tourist sites such as Lambese Tazoult, Timgad, Djemila Ruins and Hippo Regius among others that have been classified as important sites on the UNESCO World heritage site list.
Islam is the major religion in Algeria with 99% of the people being Muslim. There are also a few Roman Catholics and Evangelical Anglicans throughout Algeria. Like in many other Islamic nations, Islamic law is strict and normal religious laws apply. If you must visit a mosque, remember to dress appropriately and remove your shoes or sandals as a sign of respect. Alcohol is prohibited on the streets and limited to private non Muslim homes and bars.
Take note of where you are going to stay or dine for the afternoon. There are many restaurants in Algiers and other major cities in Algeria but it is important to stick to the recommended places because food poisoning is also everywhere. The weather is great with some areas under the temperate zone of mild Mediterranean climates especially for towns near the coast. Remember to carry light decent clothing, sunscreen and a sunhat since different parts of the country differ with their seasons.

Welcome to the online guide for travel to Algeria. You will find a range of hotels where to stay, infomation on how to get a Visa to Algeria, flight details and airports and diplomatic embassies and so much more. A lot of information for a traveler to Algeria has been prepared, for your vacation holiday and tours to Algeria, we are here to help you. Visit various attractions in the prime locations of Algeria while on a tour to north Africa.

More information on Education in Algeria, oil exploration, culture and way of life for people of Algeria, a country with great history. For an adventurous tourists, hiring a car is necessary, although there are various transport options to choose from. Algeria – الـجـزائـر is an Arab country in North Africa. It has a Mediterranean Sea coastline in the north. It is surrounded by Morocco to the northwest, Tunisia to the northeast, Libya to the east, Niger to the southeast, Mali to the southwest, Mauritania and Western Sahara to the west. After Sudan, Algeria is the second-largest country in Africa.

Algeria ranks high in terms of popular tourist destinations in North Africa. It borders, Morocco, Mali, Libya, Tunisia, Niger, the Mediterranean Sea as well as Western Sahara, Algeria is home to a diverse landscape and a population of about 35 million people. Algiers is the capital city of Algeria and even though its economy is reliant on a variety of sectors, agriculture still plays a vital role in the provision of products for the country and for export.

Products such as cotton, tobacco, olive oil, cereal, figs, cork, barley, wheat, vegetables and citrus fruits are cultivated in the country. Over recent years the tourism industry has begun to grow and develop, bringing international visitors to Algeria with opportunities to explore its beauty and diversity.